Story And Photos By: Brandon Bunch

Texas is a wild place. It’s hot, humid, and people really can’t seem to drive on the freeways. Despite all that, some of the fastest UTV racers in the country keep coming back here to race at TexPlex Park for a shot at that $200,000 series purse—with $30,000 going to each the Pro N/A and Pro Turbo championship winners. That prize, plus the extreme drive to win pushes these racers to the edge competing in what is probably one of the most rigorous UTV racing series in the country. A fast track and loose rules allows teams to turn up the boost, delivering ridiculous speeds and punishing conditions for the UTVs. Mechanical demons often show their ugly face as a result so the championship has become survival of the fittest.

The Can-Am Texas Outlaw Series (formally TexPlex SXS Series) completed its sixth round of the eleven round championship, and the Pro N/A championship has broken down to a brawl between points leader Ronnie Anderson, Kainan Baker, and Cross Kirchmeier. Ronnie Anderson has battled his fair share of bad luck this season after winning the first two rounds, and had some creep up again with his RS1 in qualifying and the first moto. 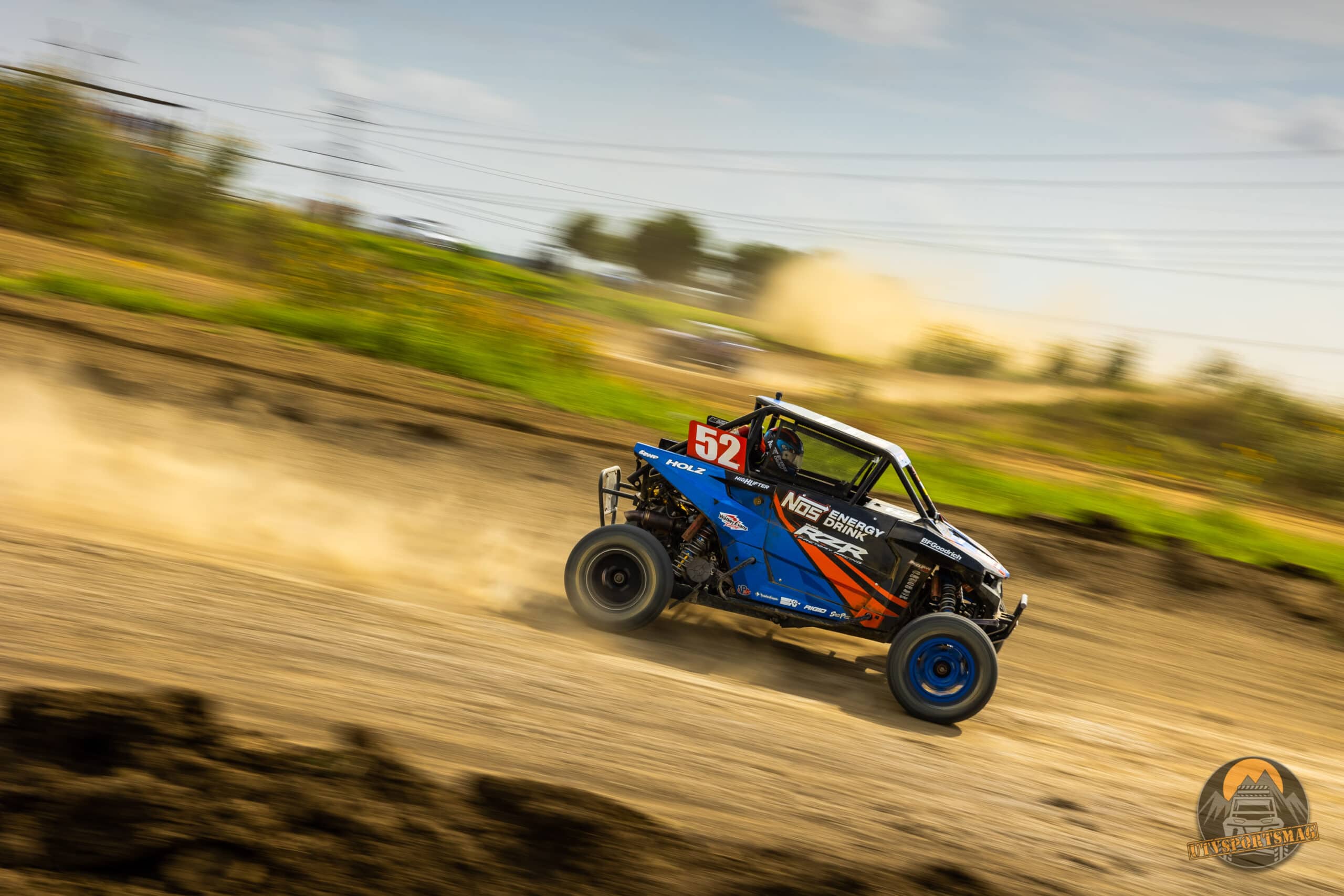 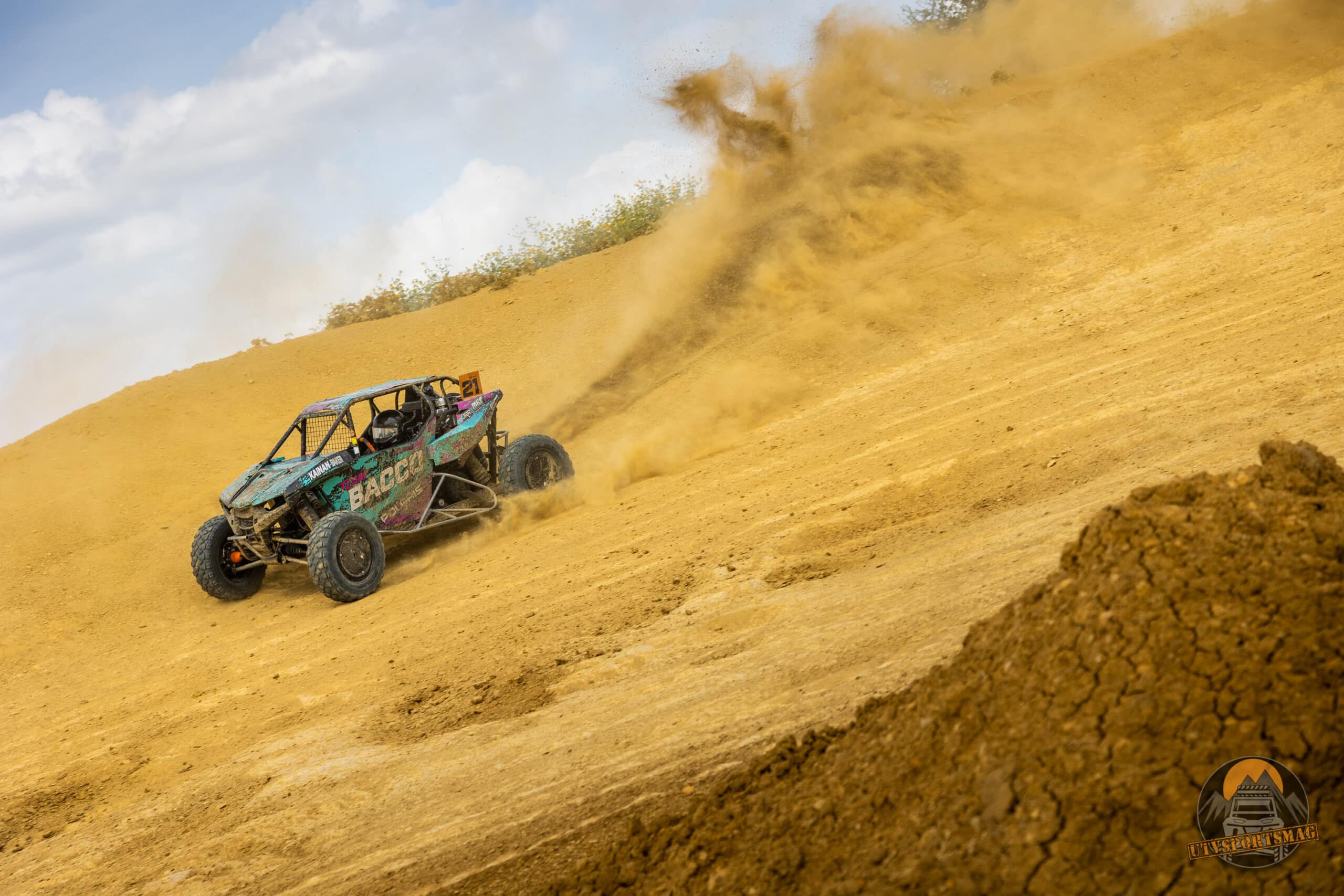 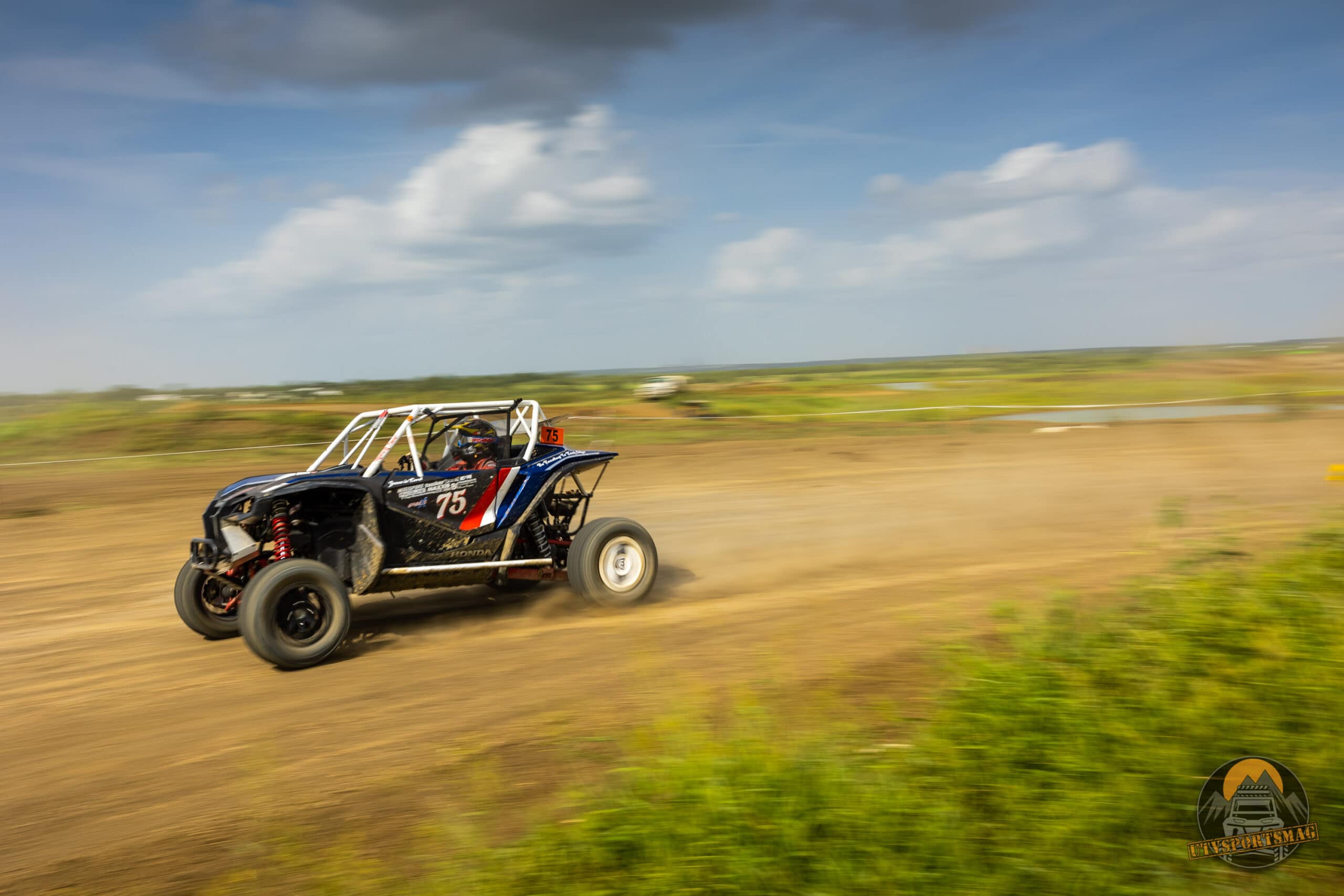 A mysterious super rich air-fuel ratio in qualifying caused Anderson to swap out to hotter spark plugs to gain some performance, and then found it super lean in the first moto causing him to cruise around the back in eighth place. He and his mechanic got it sorted out between motos and he came back to win moto two after running down Robert Stout who eventually made a mistake and ended his own race, but that was only enough to pull fourth in the overall. 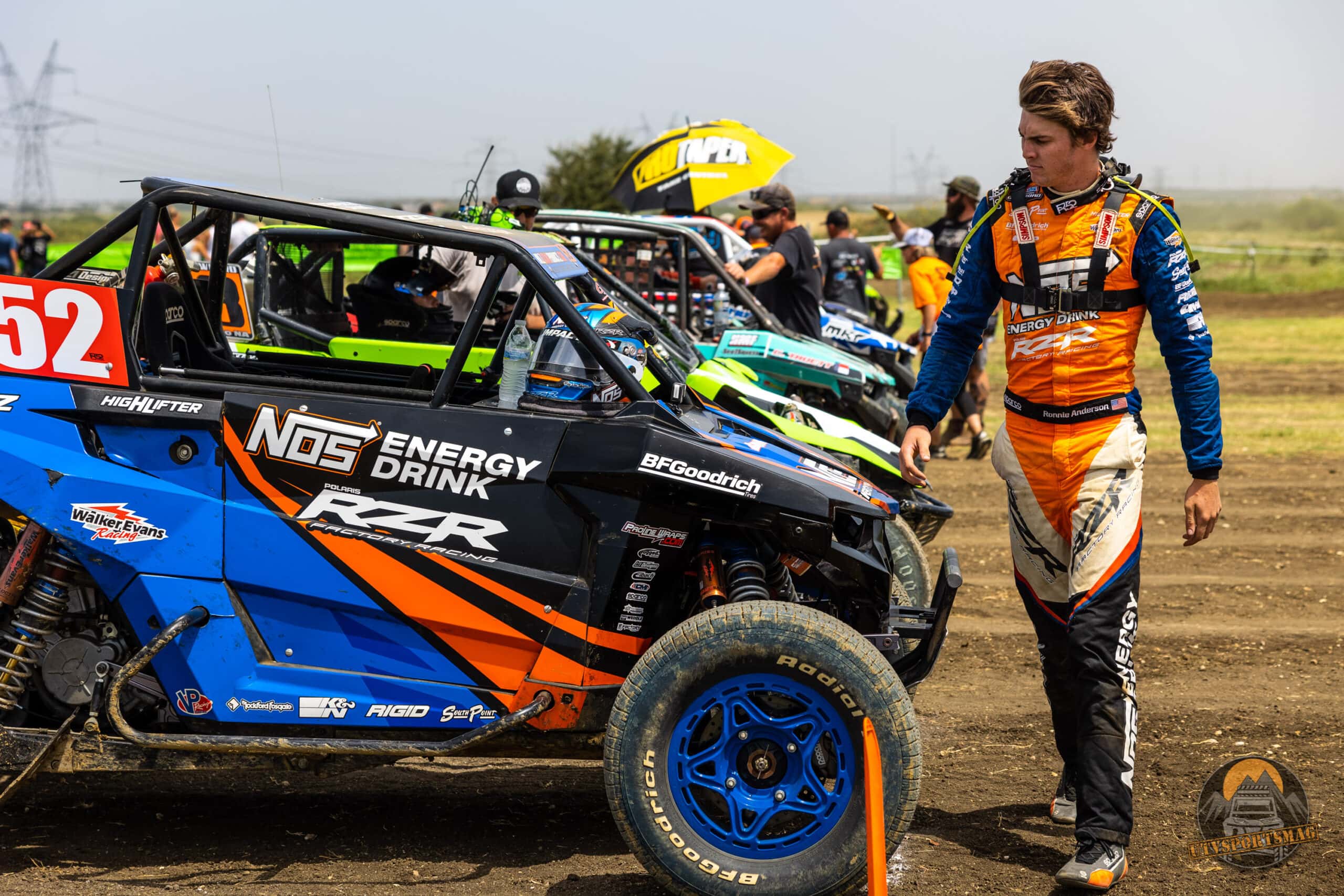 Third overall went to Koen Crawford who had a sweet and sour day. A second place finish in the first moto carried him to the overall podium, as he was running up in the top five in moto two until the engine in his YXZ gave its last breath with a big cloud of white smoke. His 2-6 moto score was still enough to put him above the two moto winners—Anderson who went 8-1 and Collin Truett who went 1-8 after losing an axle battling with Stout in moto two.

After a tough first and second round, young Kainan Baker has turned his season around, winning three in a row since then. A rough crash at another race left Kainan with a broken left foot, so he and his father adapted by installing a handbrake in his RS1. It was a learning experience for Baker, but he showed impressive maturity by running a safe pace to bring home second overall with consistent 4-3 moto scores—battling with essentially everyone that ended up in the top five.

It was Cross Kirchmeier who performed most consistently throughout the weekend and took his first overall win of the season with 3-2 moto scores behind the wheel of his Honda Talon. It just goes to show that consistency can be more important than raw speed, although Cross has shown time and time again he can stick with the lead group. The overall win allowed him to show off his sick shutter shades on the podium, and has assured he has a shot at that championship purse up for grabs at the end of the year.

The Pro Turbo class was just as unpredictable as Pro N/A, and bad luck stuffed a wrench in gears of more than just one racer here at Round 6. The free spirit that is Cody Miller has proven to be the most consistent when it comes to wrangling that big Can-Am horsepower having now won four of the six rounds including this one, while poor starts have relegated Kyle Chaney to live in a nightmare of second place finishes for second in points, while Hunter Miller has won two overalls himself but sits third in points due to finding himself backwards off the start all too often.

Qualifying early Saturday morning was exciting—Polaris RZR Factory Racing teammates Corbin Leaverton and Cody Bradbury were debuting a pair of brand new beautiful RZR Pro XP race cars built by Carr-One Fabrication. They’ve been struggling to find the speed with their old desert style cars, in addition to fighting mechanical issues, and it was time they found out how they stacked up against the competition with these new chassis that had zero testing.

Leaverton ended up laying down a 2:33.293 putting him fourth just ahead of Kyle Chaney and Hunter Miller, and Bradbury put down a 2:35.680. Both commented that the cars performed far better than the previous ones, but both also returned to the pits under tow. Leaverton’s engine let go and Bradbury’s primary clutch exploded, somehow cutting the wiring harness and breaking the engine mounts in the process. Their day was over early, but they held their heads high inspired by the new-found performance.

Ronnie Anderson again showed blistering speed in qualifying, throwing down a 2:31.989 lap time—nearly a full second faster than Cody Miller who qualified in second. The start of moto one saw Anderson and Chaney battling to turn one off the first row, Anderson put his RZR Turbo S up on two wheels allowing Chaney to slam the door open, and push Ronnie over the berm in the split first corner. This turned into an advantage for Ronnie as he now had the inside through the left hander and the lead heading onto the finish straight.

More mechanical gremlins led to a slipping belt by the end dropping Ronnie to third behind Chaney, who gladly accepted first for Heat 1, and fellow RZR athlete Shawn Saxton in the front row running order. The second row in moto one consisted of brothers Hunter and Cody battling for first, with Hunter nailing the start and bringing it all the way home for the Heat 2 win with Cody close behind. Robert Vanbeekum followed through for a safe third place finish.

One of the best parts of this series at TexPlex is the camaraderie shared by most of the Pro racers. Whether in between races, or down the start line before a moto, these guys are all grouped up laughing and chatting about previous motos, or track conditions, or other odd things racers talk about. Once it’s time to put helmets on and strap in though, they get real serious.

The start of moto two was intense as drivers bombed down into the split first turn, and Cody Taylor was first one to the inside with most of the group following, while Cody Miller and Ronnie Anderson ran wide around the outside. Chaos directly behind Cody Taylor left C. Miller and Anderson with plenty of room to dive in behind Taylor. Kyle Chaney was buried in the pack with Sean Saxton while Hunter Miller was doing a U-turn on the start stretch and playing catch up after getting turned around.

Anderson would soon find bad luck again and blow a belt on the first lap (we talked about maybe needing gargoyles or burning sage to ward off the bad luck demons). Cody Miller found his way around Cody Taylor and stretched out his lead, and they would both put in consistent laps to stay there till the checkered flag. Chaney pushed his way up to third, a strong performance for the Can-Am driver but he was unhappy with the result. Shawn Saxton was close behind in fourth and Hunter Miller clawed his way back up to fifth after being in thirteenth on the first lap. That’s a lot of passes in only six laps.

At the end that left Cody Miller on the top step of the podium again with 2-1 moto scores, proving they have those Can-Ams very dialed in. Kyle Chaney took second overall for the fifth time this year, and he echoed that he wants nothing more than to win a race and that he’s tired of finishing second. He is in a good position for the championship fight however. Third overall went to Shawn Saxton, his first podium at TexPlex and also the first non-Can-Am to be on the Pro Turbo podium at TexPlex this year. Round Six definitely delivered the wild racing that TexPlex has come to be known for, and is sure to deliver more on the way to the final round.